From the Providence Journal

Seventy-five years ago, John Votolato, a native of Italy, opened a small hardware store at 1363 Plainfield Street in the Thornton section of Johnston, catering to Italian immigrants who were establishing a new life in America

"My grandfather was one of the few people in the community to speak English. He became an agent and sold tickets for passages to Italy," says Barbara McGuirl, who now oversees the store her grandfather started. "Neighbors relied on him to interpret fares and ticket information," she adds.

As a familiar figure in Johnston by the early 1900s, Mr. Votolato began to express his appreciation to his new country by decorating houses, churches and storefronts for various political and community functions with flags and banners.

"All the flag and banner decorations in Johnston were done by my grandfather. His store was the only one in the area to sell these items," says Barbara.

Every year he would decorate St. Rocco's Church for their Italian feast, and pave the way in color for parades that stretched along Atwood Avenue. Mr. Votolato's popularity soared so much that he was later elected as the first councilman of Johnston.

The hardware business eventually grew into the ABC Flag Company, where the red, white, and blue flags and banners became a main staple at his store. People would come from all over the state to purchase flags at the tiny store in Johnston.

In later years, the ABC Flag Company was passed down to Mr. Votolato's son, Mario, who runs the store today with the help of his daughter, Barbara.

"My father is 80 years old and not able to work as much as he used to. He does come in the store for a couple of hours a day," she says.

The ABC Flag Company is one of less than ten companies in Rhode Island that sell all types of flags.

"We are not a manufacturer of flags, we're a vendor," states Barbara. "We order our flags from a company in Pennsylvania which has been in business since 1847," she says. 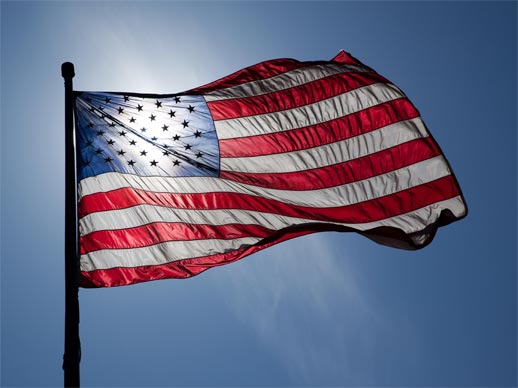 According to Barbara's husband, Bruce, there is a wide cross section of people who purchase flags.

"More businesses and colleges buy flags than anyone else," says Bruce. "Just recently Johnson & Wales bought 39 international flags and poles for their graduation ceremonies," he says.

While the American flag is still the most popular of the flags purchased at the company, more and more orders are being placed for international and commercial decorations. He adds that he rarely sees young people come into the store who want to show any display of patriotism.

"The majority of people who buy American flags are World War II veterans and older people," explains Bruce. "It's really sad," he says.

As Fourth of July parades and celebrations draw near, a demand for American flags, banners and decorations is increasing.

"Most of the flags in the Bristol parade were bought here," says Barbara. "We have a good reputation for quality goods and services, and we like what we do," she says.

Surrounded by her father's memories of years gone by, when patriotism ran high, Barbara McGuirl sits behind the desk once used by her grandfather, in a room filled with colorful flags, and simply states to the Life reporter: "I just love flags."

ABC Flag Company is one of the oldest flag retailers in the country.  All flags are US made and US strong.